It was thirty years in the making. “I always felt since I started in the business that there weren’t enough roles for black people, especially black women. At around eighteen, I started to write or try to learn how to write because I thought the quickest way was to be a creator.” Actress and writer Erika Alexander talked to Shadow and Act while in the very capable hands of her hairdresser and stylist, readying herself for a slew of high profile events that included an Oscar party and political fundraiser. “ Of course, it took me longer to learn the craft and get the momentum to have the discipline for it. In the meantime, my life kept going and my career kept going.”

Alexander holds the distinction of creating two iconic, beloved roles: Pam Tucker on TV classic The Cosby Show and lawyer Maxine Shaw on the roommate comedy Living Single. During all that time, she never lost sight of her vision, continuing to hone her craft at writing. Finally, preparation bumped into luck. Alexander met successful businessman Ben Arnon. “We met during the 2008  campaign. He was an Obama delegate and I was a Hillary delegate. I was telling him about all these scripts I had written over the years and he asked me what I was doing with them.” Alexander confessed that though she took meetings sometimes, she really wanted to do be doing a lot more with her work. Arnon, quick to pick up on the value of what Alexander was doing, got to work. “He really put his business acumen on it and then we were on our way,” Alexander explains, “I’m mostly a creator and an actress but he knew about being an entrepreneur, he had gone to business school at UCLA and he knew how to be aggressive. Putting together his hustle with my flow, we had something!" she exclaimed in her signature, throaty laugh.

An extremely gifted photojournalist,  expert in cryptocurrency investing and savvy businessman, Arnon was a critical figure in the success of social media marketing company Wildfire which Google purchased for almost half a billion dollars. He soon formed the production company Color Farm Media, with Alexander. It was, for her, the culmination of three decades worth of effort. “Color Farm is changing the face of media but the face of media had to change in order to acknowledge or support companies like Color Farm.” People such as author and essayist Malcolm Gladwell have long believed the axiom that timing is a crucial variable in achieving or not achieving outcomes. Alexander’s experience appears to bear this out. “Over these past few years, studios have been very interested in new voices. Their whole business model changed in Hollywood. They saw that they had been wrong all this time. Not only do black people sell, they were essential.”

Color Farm is looking for more than just scripts.  “We’re looking for things like podcasts, plays, graphic novels. These all have low barriers to entry. If it’s right, we can build that audience organically and connect it to the audience that would normally be attracted to it, or find an audience for it.” As for the type of content they are seeking, Color Farm is looking to expand the idea of what inclusion and diversity is. “At Color Farm, the whole idea is not just to say the word ‘diverse.’ Diversity means many different voices and perspectives. Black, white, Latino, Asian are a given. But you also have the elderly, the disabled. I’m from Arizona and grew up in a Lutheran Church. We’re looking for those types of people who may not fit in those stereotypical ways.” Buoyed by the recent success of films like Black Panther and Get Out (in which Alexander appeared), Color Farm is also excited about taking a deep dive into those genres.  She explains, “We’re also looking to science fiction and horror which we had been up until recently excluded from but because of Get Out and Black Panther, we’re really leveraging those voices. Now they’re looking for black speculative fiction, Afro-futurism. That’s what Color Farm is. We’re a little more scrappy and less designed to be a part of the typical Hollywood structure.”

Alexander and Arnon have wasted little time in getting Color Farm’s slate of projects off the ground. They already have two films in development. One in particular, about The Boys Choir of Harlem is a collaboration with Paul Garnes. Garnes is well known as Ava DuVernay’s longtime production partner. ”We’re doing rewrites of that script and by end of year we will be in production. We’re also working on something with Lionsgate and I’m currently doing re-writes on that as well.” A longtime graphic novelist, Alexander and creative partner TV writer Tony Puryear (The Queen of the South), are currently also working on the third volume of their series, Concrete Park under the Color Farm banner. 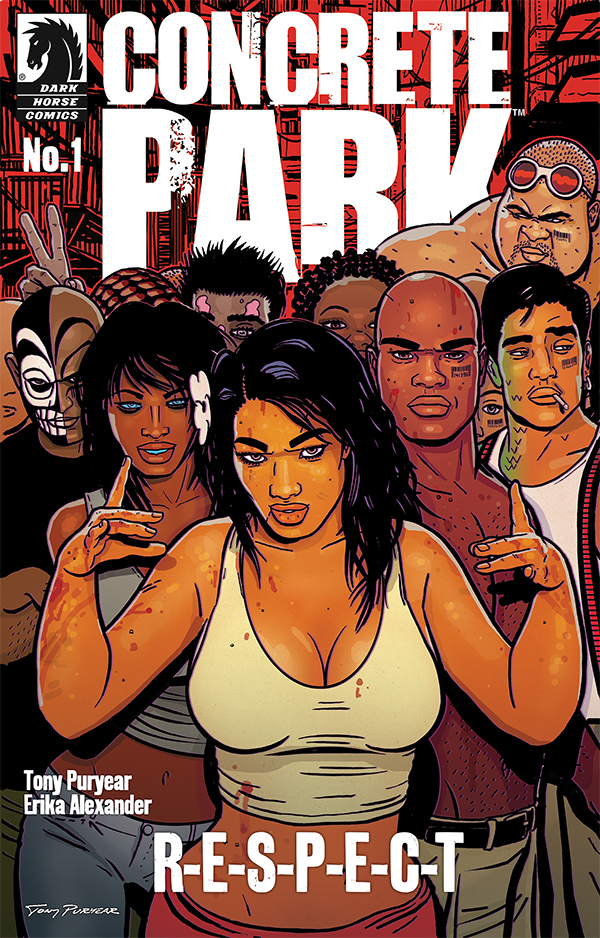 Aspiring creatives with hey type of content Alexander indicates Color Farm is looking for can, she says, “Go to colorfarmmedia.com to the “Join Us” page and they can write us and we’ll respond to them.” All my life people would come to me on the street and say they had a product and they’d ask what to do with it. They had books, short films. Now I’ll be able to say, send it to us, sign a release and we’ll talk about it.”