'Howling 2: Your Sister Is A Werewolf': On Marsha Hunt and the rise of the modern werewolf genre

The 1980s was a golden era for horror films. The decade introduced the world to Jason Voorhees and Freddy Kruger, turning them into iconic monsters that rival Dracula & Frankenstein’s monster.
But another of those classic horror villains also had a reinvention of sorts in the early part of the 80s…the ‘Werewolf.’
From April to August 1981, three horror films, all dealing with people turning into werewolves were released on the big screen: The Howling, Wolfen, and An American Werewolf in London.
Of the three, An American Werewolf in London and The Howling were the box office winners. Wolfen‘s production budget was $17 million dollars, but the box office take was $8.8 million.
In the pantheon of horror films that are produced for the global marketplace, women of African descent rarely show up in the genre, and if they do, they usually become a victim because they found out who the killer was until it was too late, or didn’t exit the bloodstained basement quick enough.
Marsha A. Hunt was born 1946 and raised in the states, but moved to the United Kingdom in the mid-1960s, becoming a fashion model and stage actress/singer, appearing in the West End production of Hair, and fronting various music groups throughout the 60s.
Hunt is also known for having a child with Rolling Stones frontman Mick Jagger.
She made her film acting debut in the 1972 UK horror film, Dracula A.D. 1972, starring Christopher Lee.
Four years after the original, Howling 2: Your Sister Is A Werewolf is released. 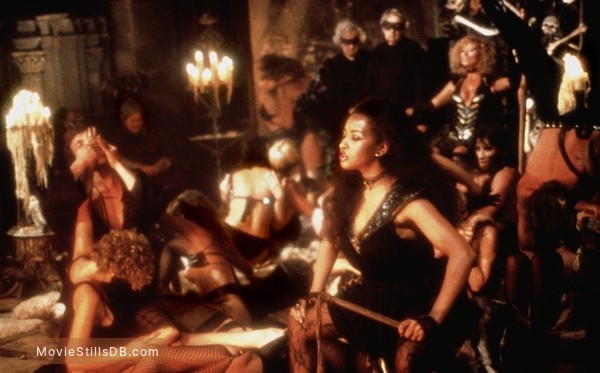 The original title was Howling 2: Stirba-Werewolf Bitch, which I guess, was too much for U.S. censors.
Others in the movie include the late horror film icon Christopher Lee and Sybil Danning.
In Howling 2, Hunt plays ‘Mariana’, a werewoman who is as sexy as she is deadly.
Part of the film’s plot involves Mariana traveling to Transylvania to be impregnated by a male werewolf priest in an effort to bring forth a new generation of super werewolves that would take over the world.
I first saw Howling 2 a couple years after it was released on home video when I was a preteen.
It was one of my favorite type of horror films; ample amounts of nudity & gore.
After recently rewatching the film for the first time in maybe 25 years, I see all the flaws that 12-year-old me didn’t see.
The script, performances & special effects are all lacking and haven’t aged well.
While reading about the making of the movie, the werewolf costumes were actually gorilla costumes from the original Planet Of The Apes films from the 1960s.
Over the years Howling 2 has gained a cult following, with the film being released on Blu-Ray a couple of years ago.
After roles on British television in the late 80s, Hunt retired from acting to focus on her writing career which includes three volumes of her autobiography and four novels. In 2005. Hunt published her autobiography, Undefeated, dealing with being a breast cancer survivor.
Besides the Underworld (co-written by actor/screenwriter Kevin Grevioux) films of the early 2000s, werewolves don’t seem to scare the public the way it used to.
There have been numerous werewolf films released in the past few years, but none has reinvented the wheel, so to speak.
But Ms. Hunt has her place in this particular horror niche…it only makes sense her image is on the Howling 2 Blu Ray cover.
She’s the most memorable part of the movie.