Brian Michael loves playing police officers on TV. Though most actors fear being typecast in certain roles, the Harlem-based actor isn’t afraid to admit he loves playing cops. It is almost as if it’s one of the perks of being an actor for him. His most recent turn as a member of law enforcement was on Queen Sugar,  where he played a friend of Ralph Angel’s from high school. 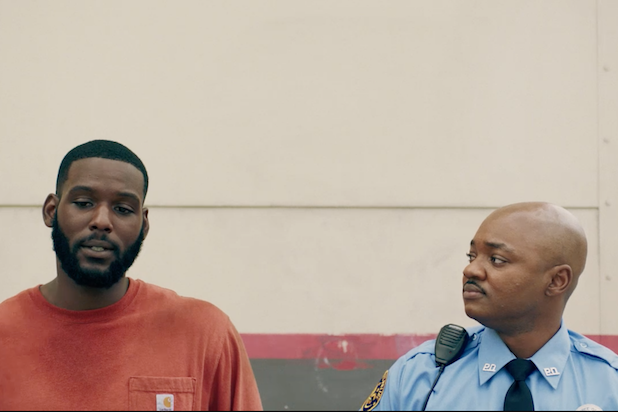 Michael recently sat down with Shadow and Act at New York’s Grand Hyatt hotel. With the hum of summer tourists and jazzy house music as a soulful backdrop, he shared his experiences as an up and coming actor. With the reassuring appearance of someone who is always just about to break into a smile, he is easygoing yet deeply thoughtful.

“I love buddy cop movies,” He begins.  “Lethal Weapon and things like that. I grew up on Law & Order: SVU and all those different shows. I just like how each episode takes you to a different corner of the world. I am from Michigan but I got introduced to New York watching these kinds of shows and movies. I like how complex the characters can be. They’re always trying to do the right thing but maybe not always doing the right thing. I like that these particular shows rip something that is happening around us and explores it.”

Michael, who will appear on the October 18th episode of Chicago P.D., admits that as an African-American, his love of playing cops may be perceived as problematic given the current social and political situation in the United States. For him, the experience is a way of looking at life from both sides. He says, “I learn from what I play. There’s a lot of things that happen within the cop community that I don’t understand. Why the blue wall of silence? A lot of what motivates police action is safety and the perception of what is a threat. And sometimes those perceptions are based on faulty ideas but at the end of the day, that’s what it is. That’s why they have such a hard time with people not understanding.”

Michael is just coming off a successful run of the off-Broadway production, A Real Boy, where he played they puppet father of a human child whose kindergarten teacher decides needs to be saved from his puppet parents. “It’s about what happens to people when society ‘others’ them” he says.

Michael grew up in a large close family with cousins his own age who were his playmates. He grew up in  Ann Arbor Michigan and has, for the most part, always lived as a male though his gender assignment at birth was female. “My mom and her three sisters were very close.” He says, “From 1982 to 1989, one of them was always pregnant so we were all raised together. They even lived together for a time. “Me and my cousins were all raised like siblings so we spent a lot of time together.”

Prior to adolescence, he was seen as just a tomboy though if asked, he would always tell people he was simply, a boy. Once the teen years hit though, decisions had to be made. He says, “I just was like, ‘I’m in a different category. I was always on a different part of the spectrum than the rest of the girls. In high school, it was a challenging time. People were starting to split off and I wanted to do the same things I was doing before but the doors were closing. My mother was like ‘Grow up. It’s time to be a young lady.’ He tried to be more feminine but it didn’t last long. He fell in love with football.

After breezing through tryouts, Michael played fullback and defensive end back on Ann Arbor’s Pioneer High football team for all four years of high school. He was also on the girls’ track team at the same time. Both Pioneer High’s football and track teams are noted as being some of the best such programs in the state. The school is also the alma mater of filmmaker and documentarian Ken Burns (The Civil War, Jazz). Michael never encountered any resistance or met with any conflict in either locker room. “That’s Ann Arbor in a nutshell.” He explains.

The acting bug had hit Michael at Kent State but the heavy emphasis on musical theater didn’t resonate with him. Then he says, “I discovered they had a TV studio on campus. They had student-run TV shows as well and I finally felt like I found my tribe there. I switched majors from theater to TV and film production.” Another reason for the switch was some of the instructors were not the most sensitive to his identity as a man. When he brought a scene to class that took place between two men, his instructor told him he was being unrealistic. “He was like, ‘No you can’t do this you have to find something that people will actually cast you in. They’re never going to cast a female for these scenes. Don’t do this to yourself.” Majoring in TV and film production gave him the power to create and cast roles in ways that were more natural.The seeds of doubt planted by his misguided professor (who eventually apologized) had taken firm root. Though Michael moved to New York City to become an actor, he failed to put any energy into pursuing it. Finally, feeling like a bit of a hypocrite while teaching media literacy to youths in New York City pushed him to overcome fears of rejection and his insecurity and practice his craft. “Here I was teaching these young people and telling them ‘whatever you want

Michael agrees that trans men tend to be less visible in the media than trans women such as Laverne Cox and Caitlyn Jenner. He attributes this to several factors including sexism and what society has been conditioned to accept when it comes to gender expression and presentation.

He believes trans male visibility is however, slowly increasing. “Tiq Milan and Nick Adams over at GLAAD they’re doing a good job of raising that visibility and Emmett Jack Lundberg is doing a series called Brothers where he showcases trans masculine narratives. ” One of the great things for Michael about the Queen Sugar episode in which he appeared, is the fact that it moved the trans male ‘conversation’ as it were, forward. Queen Sugar decided to focus on the person instead of the usual topics such as Michael says, “The transition, the coming out, the rejection, this person came out and their lover is staying with them in spite of… (emphasis his). That’s about the observer. It’s not really our story. That’s what I liked about the Queen Sugar role. It explored another area. Not everything is negative. This person happens to be trans but this moment is about friendship and gratitude and how far unconditional love and support and love goes. They were just friends, just homies.”