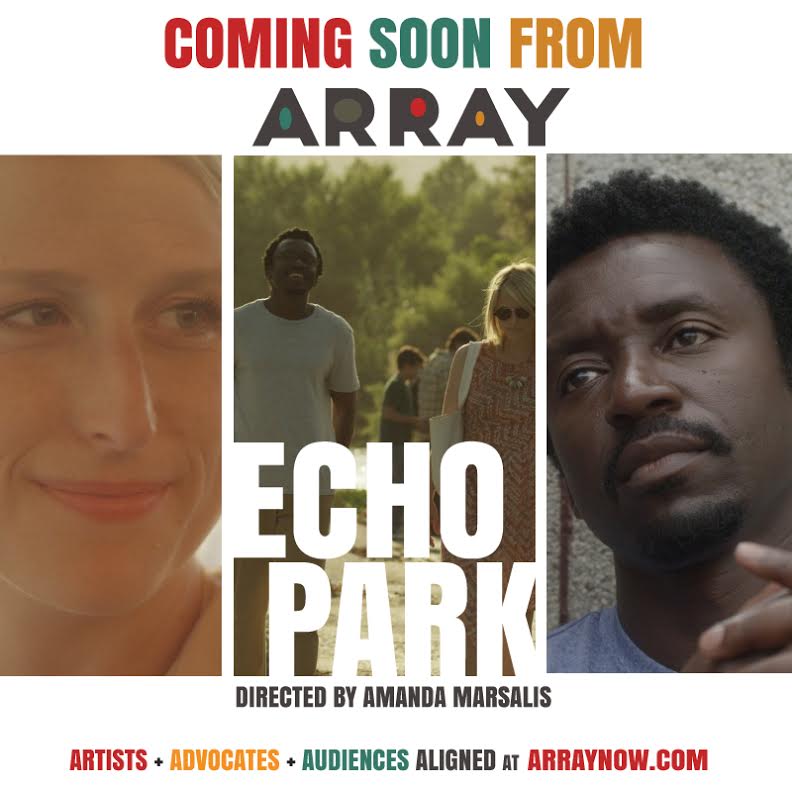 Echo Park is an understated indie

romance starring Mamie Gummer and Tony Okungbowa as Sophie and Alex, a

pair whose shifting lives and relationships mirror the gentrification shifts in

their Los Angeles neighborhood. They find themselves drawn to each other as

move back to his native London.

Okungbowa, who also produced and co-starred

DJ on The Ellen DeGeneres Show, made time to talk with Shadow

And Act about his role in the new film. As a British-Nigerian native

who grew up in both places and has also lived in New York and LA, he had lots

to say about the cultural undertones of the film and the movies at large.

JAI TIGGETT: Many know you from the Ellen show, but you were a trained actor first. Tell me about

transitioning back to acting full time.

TONY OKUNGBOWA: It was sort

of a planned thing over the last few years, from Restless City to Mother of

George, and then doing a bit of television as well. And it’s been really

good, somewhat strange of course, because you walk into a room and some casting

directors are like, "Oh, I didn’t know you were an actor." Because they’re used

to seeing me on the TV show.

JT: I imagine it’s been helpful as well, in terms of the notoriety

you’ve gotten from the TV show?

TO: To a certain degree it has.

Because if you think of a small film like Echo

Park, it’s a teeny tiny budget but I was able to go back to Ellen to talk about it in front of a

worldwide audience of seven million people. To get that kind of exposure on a

movie this small is next to impossible. And then I did an episode of NCIS

LA with LL Cool J and we

went on the show to publicize it as well. So it’s kind of an added bonus. I’m

hoping it’s something positive that people will say, "Hey listen, we can use

this to our advantage as well," as long as I do the job correctly. That’s the

first and most important thing.

JT: How did you get involved in Echo Park?

TO: It’s actually a story I came up

with. It was loosely based on a couple of situations and people I know. People who,

even though they’re British or from Europe, they still have immigration

problems, work problems, or money problems and they have to move back home. A couple

Europe. So they were just vignettes of things that have happened.

It’s interesting because the other day I was

about gentrification, and it’s happening in every neighborhood. Echo Park is

the new hot spot. You can’t walk down the street without seeing new apartment

buildings or something being turned over. I moved to Echo Park in 2003 and I

guess I was part of a wave of gentrification, but a wave that could withstand

its rough edges, so to speak. So I wanted to tell a story that was just about

real people. I came up with the story, I met Catalina Aguilar Mastretta, the screenwriter. She wrote a great

script and Amanda Marsalis came on

board to direct and that was it.

JT: Gentrification is everywhere. We just had a similar

conversation with RZA when Brick Mansions

was released. And with the characters in Echo

Park, you have one of them lamenting how much the neighborhood has changed,

and missing what it used to be. How do you feel about the issue?

TO: My view on it is somewhat

reflected in the film, which is that no matter where you’re from, you come to a

neighborhood and you respect the good that is there. People don’t just own

homes in a neighborhood and let it go to hell. There’s good that goes on there,

and every neighborhood has its own culture. For instance, if they have a block

for years, let them do it.

If you come into a neighborhood, you see the

good that exists and support that. And then you push out the bad, whether it’s

drugs or whatever it is that’s detrimental to the neighborhood, those are the

things you get up in arms about. But you don’t just come in and as Spike says, bogart your way in and say, "This is how

we’re doing it from now on." That’s where the friction lies, when you come in

JT: The female lead in Echo

Park seems very much in charge and driving the relationship, which is

different from what you see in a lot of romantic comedies. Did that also come from

TO: Well it didn’t pan out in real

life as it did in the movie, thank goodness. But I really believe that as long

as you don’t play a victim, you can play anything. And also the way that black

men have been portrayed on screen, we never are shown to be subtle or

vulnerable. Strength is okay, but I wanted to show a different side of us, a side

whereby we show that vulnerability and complexity. And while she’s driving the

relationship, I hope people get a sense that it’s about more than that for him.

Eventually he realizes he has to take a stand for himself. 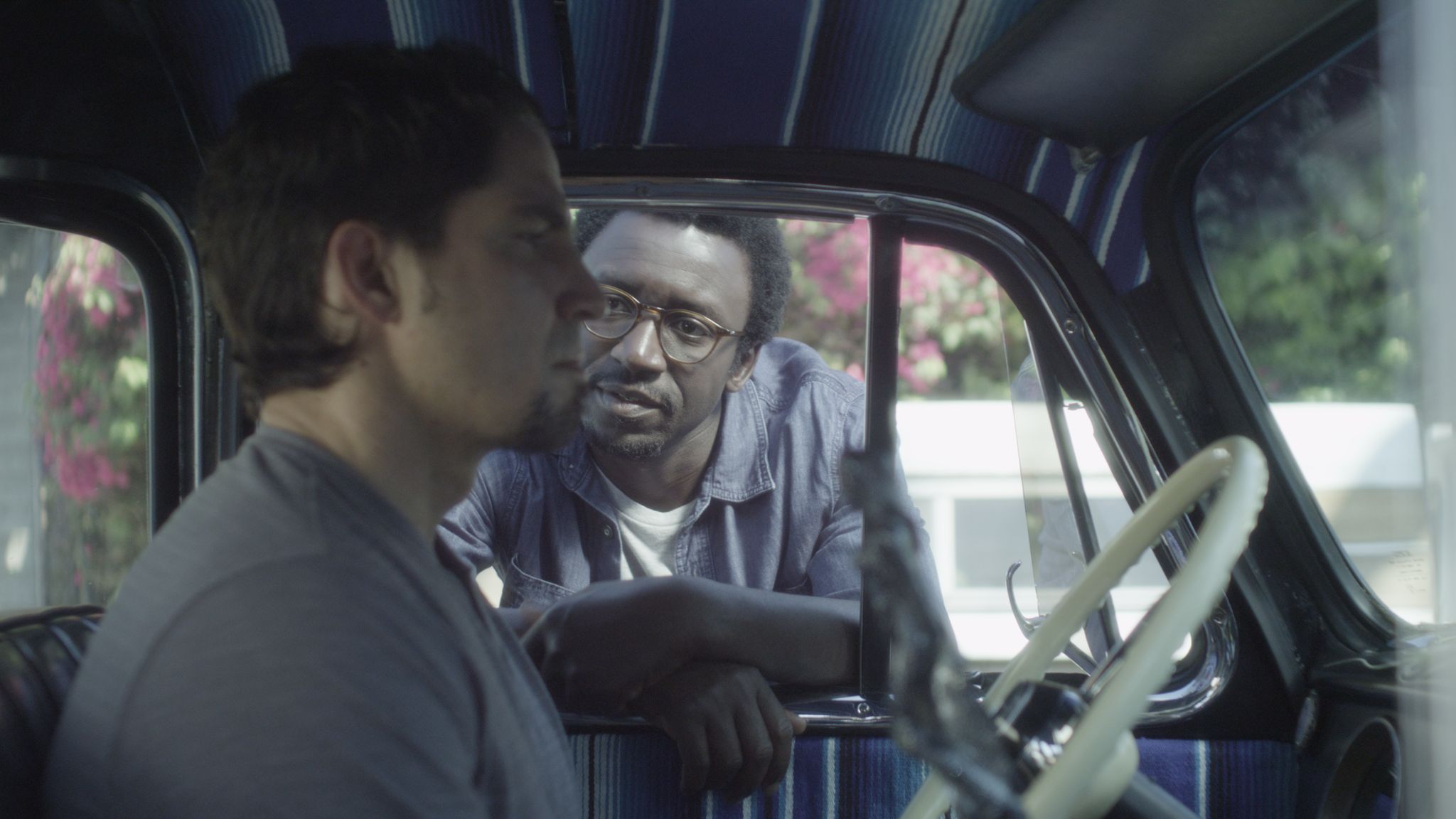 American, black, white. But that isn’t directly discussed in the film.

TO: A couple of people have said

that. When I look at my neighbors, three of the four neighbors around me are

each other’s phone numbers and we just exist as a community. His mother’s in

the hospital, I go see her. I go out of town, he watches my dog. It’s just a

sub-community that is formed out of the larger community.

And then coming from England, I just have

been brought up to date whoever I fell for. Now in America is where I have

lifted my eyebrow a bit when it comes to dating. But generally, I always

thought that if a person likes me and I like them, we’ve got a lot in common,

let’s consider it. And we didn’t want to make an issue of it in the film.

JT: It’s interesting to hear about the difference in interracial

relationships in the UK compared to the US.

TO: Yeah and I think, without

getting into the deep racial context of it, you have to take into consideration

how African Americans have come to be here. Their experience is one of being

forced to be here. It’s one of abuse and discrimination that has existed

through years of slavery to Jim Crow. But it’s not the history of many other

people in the Diaspora who come here, who have seen kings and queens and

presidents and captains of industry who are the same color as them. So they

walk into a room and say, "I can date you, why shouldn’t I be able to date you?" That’s kind of what I think feeds the ability to think like you belong and you

can date whoever you want.

JT: Right, there’s the idea of not being limited by race. But

rare to see black couples in films to begin with. I think about the aesthetics

TO: [In the film] I have romance

that situation. As an actor I want to show the diversity of my ability of

course, and I also want to show the realities of life. The irony of it is that Mother of George is set against the

backdrop of Africans and Echo Park is

set against the backdrop of modern day America.

But they are all different love stories

featuring the complexities of black people on screen. And so when a role comes

up and it’s something different, that’s a good muscle to flex. It’s also the

reality of my world.

JT: You’ve worked on a couple of Andrew Dosunmu’s films. Do you

plan to work together again?

TO: Andrew and I hope to contribute

to the revolution of people of color telling stories of the Diaspora. We have

some amazing things on the table, including Fela Kuti. We’re working

on a bunch of stuff.

JT: How did the two of you get connected and start working

TO: We went to rival schools in

Nigeria. When I say rival schools I mean academics and sports, mainly soccer.

and we just bonded. When I used to live in New York, I lived in Fort Greene [Brooklyn]

and he lived in Prospect Heights. There was a whole community of us back then

who used to just hang out. Isaach [de

Bankole] was in that neighborhood as well.

JT: Any other upcoming projects that you can discuss?

TO: I am in process of funding a

feature right now, which is very timely and deals with a number of issues, from

sex trafficking to death row to misogyny. We should know in the next couple of

weeks whether we’re funding that. And then I’m developing a movie that crosses

between Hollywood and Nollywood. And in between that I’m developing vehicles

for television, because that’s where I’ve been known. I guess as an independent

filmmaker the best thing one can hope for, besides the success of their films,

art. I believe that when you live within a community you do have somewhat of a

responsibility to that community. That’s just my belief, I’m not putting it on

anyone else. When I do things I really hope to contribute to society in a way

where conversations can be started.