Launching soon, Queen Sugar star Kofi Siriobe is bringing to life his new venture, a media and lifestyle brand that is throwing it back to the 2000s.

We're Not Kids Anymore is the platform and the first phase, Timeline, is described as a portal past and a preface to the future. The interactive web experience features a curated selection of 1000+ events that took place in these crucial years. Siriboe and his tech partner, Julian Lane, are seeking to illuminate time by bringing together cultural moments that shaped a generation.

The actor, who sat down with Shadow and Act ahead of the launch to talk about it, says it sits at the intersection of tech, education and entertainment, utilizing the past as a vital tool in reimagining the possibilities of the future. 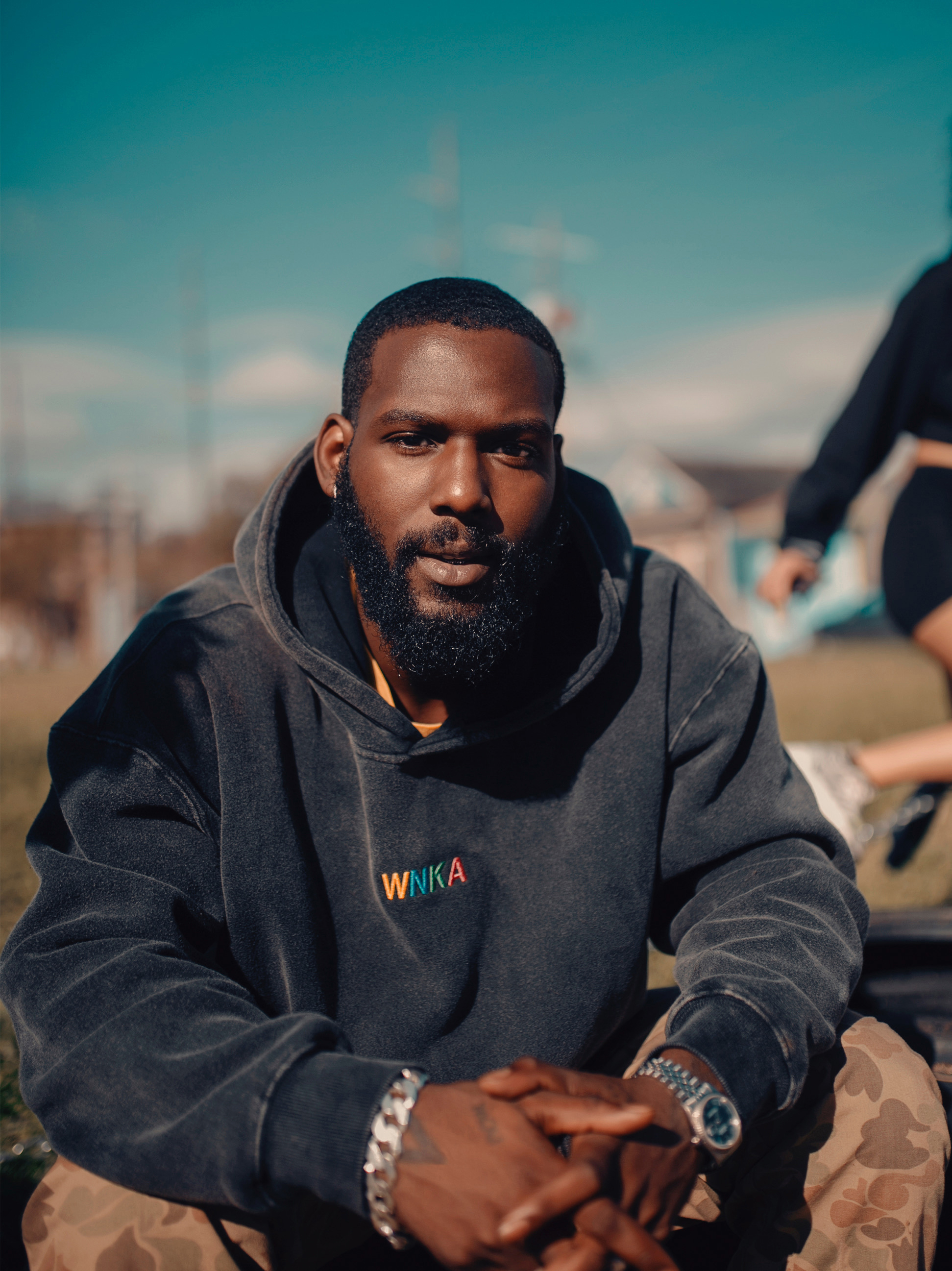 Check out the conversation below:

Trey Mangum: I've actually been following along as you've been teasing this project on social media. It’s been intriguing for me because I'll be 28 next month, and I often find myself feeling like I'm actually getting older...but not really. But when you think about how many things we had growing up that don’t exist anymore, it’s like wow, [we are] a whole generation with defining characteristics and there is another generation after us that has that too. They grew up with social media, but we were like coding on MySpace. It's totally different. Also, I’m lowkey obsessed with the 2000s and I don’t think that decade get enough credit. It’s overshadowed by the ‘90s. Maybe the 2000s will be for Gen Z like the ‘90s were for us. Anyway, how did you come up with the idea for We’re Not Kids Anymore?

Kofi Siriboe: You know, I’m 26 myself. And they say we grew up with the technology. We were pretty much the experiment for the technology. That being said, I remember turning 21 and being fresh in my twenties and I actually moved to New Orleans. That was the year I shot Queen Sugar for the first season and Girls Trip, etc. It was a lot going in my early twenties...a lot of new things going on, along with the fact that the world was changing so fast. I just remember wanting a space to process that and [I was] looking for a space to process that before even really desiring it. I was just looking for it because I was like, ‘That just makes sense.’”

Like, I'm this young adult [and] there's so much going on. Everybody coins this time as the information age, but how do you process it? How do you actually make it digestible to actually utilize it as a tool rather than feeling overwhelmed by it? Five years later, and a pandemic later, I was sitting home like we all were and all of the ideas and all of the things that crossed my heart and mind in the last five years came to surface and We’re Not Kids Anymore really stood out. And specifically during the pandemic, there was the revolution of social justice spreading across the globe.

Naturally, I wanted to do something beyond just showing up and being there with the community. I've always wanted to do something...that's my entire algorithm of existence. It's like how can I be of service to not only myself, not only my friends [and] my family, but everybody? We're Not Kids Anymore was born, and it was one of those things where I just wanted to concentrate and illuminate time. Because things are moving so fast, it's so easy to overlook our own experiences and we're always trying to keep up with time and keep up with society and keep up with culture. We're always looking ahead and creating new things as we move, but I just think it's important to reflect and actually appreciate and find value in the experiences that shaped us to this moment.

TM: I do think that everything moves at such a rapid pace. Sometimes you have to stop and think about and categorize things. What will this venture be like and how will people be able to access it and connect with the content that’s on it?

KS: We describe We’re Not Kids Anymore as a network of nostalgia which connected via media memories. Our space is a celebration of time and we consider this our Phase One. We expect to explore all kinds of different mediums within the scope of content, but we're starting with our first phase one to keep it simple. [On] WNKA.co, we're launching a virtual timeline pretty much starting at the year 2000, all the way up to this present moment, which makes 21 years. We’re just going to be experiencing the last two decades at the swipe of a finger. We have over a thousand facts, which include some amazing cultural moments [and] a lot of Black excellence moments.

We’re talking about the digital revolution, Limewire being created, YouTube being created in 2005, and you know, Twitter was there, MySpace and what happened to Tom [laughs]. Trying to start with a little over 1000 facts is extremely hard. You can only imagine everything has happened in these last two decades. We’re starting with that virtual timeline as our Phase One. We also have some merch that we're going to be introducing as well, sometime between launch and Christmas. For the new year, we’re just looking to make collaborations and connections with artists and influencers who have audiences that are craving the conversations that are going to connect us back to our true selves. And not to say we’ve left our true selves, but there's just a lot, there's a lot of information, there's a lot of things going on with the government, politics, etc. And we just need safe spaces to talk about it and elevate the conversation and create those solutions forward.

TM: If there was one thing that you could bring back from the 2000s, what would it be?

KS: Oooh. That’s a good question. Now you’re making me think. Don’t do this to me [laughs].

A post shared by We’re Not Kids Anymore™ (@werenotkids)

TM: That’s a very good one because I’d say about 2016-ish, I had just graduated college and I had post-grad depression really bad, because you know, you go from like four years of one thing and then you're in the real world. And during this time period, I would just think, “If I were a freshman in 2011 right now, what would I be?”

KS: Right! It’s more of a feeling, right? Like I remember. That's why when you asked me, I'm like damn. I mean, that was before like Uber was a thing. Like when I asked my mom, could you take me somewhere, you know what I mean? [laughs]. These kids could just call their own Uber. And to know that that didn't exist for me growing up..like I saw that [ridesharing] be birthed. That's the wild part.

TM: It’s weird because I remember Uber coming up and it like….just happened. No in-between. I was like, what did I do before this?

KS: Like what were we doing before Uber? I always laugh because back in the day as a kid, it’s like, “Don't get in cars with strangers, don't talk to strangers, don't do anything." And now, because of technology, it's like we can't avoid interacting with strangers. We trust them with our lives...like getting in a car with somebody and letting them drive you, whether it's 10 minutes or 10 hours...I guess we get in the car with strangers now. It’s so wild.

TM: It’s just like as society evolves...just things that you never would think would happen.

What is the ultimate goal that you have for this platform? Let’s think about it a little bit down the road.  How do you envision it?

A post shared by We’re Not Kids Anymore™ (@werenotkids)

KS: I would say tasty and nutritious [laughs]. I feel like a lot of our young culture, or culture in general, is rooted in entertainment. And I feel like education has lost its charm over the years genuinely. And as somebody who graduated high school early, I never went to college. I kind of really started my young adult life head first. I really see a space that expands to a global community where we redesign and reimagine the identity of education we reimagined identity in itself. And we really start having fun with our experience as young people in this new world. I think it's changing so quickly and there are so many definitions that get thrown around, but the truth is it's happening so fast and it's happening right now.

We get to create and define that reality that we now live in. I want us to be a staple in the young community globally and I want us to have these conversations effortlessly and I want education and become cool again, because when was learning not cool? Like I always say, when does an adult that being a kid and when does a kid become an adult? I think our goal is to always be the space in between kids and adults. And that's a big space.

Check out We Are Not Kids Anymore here.