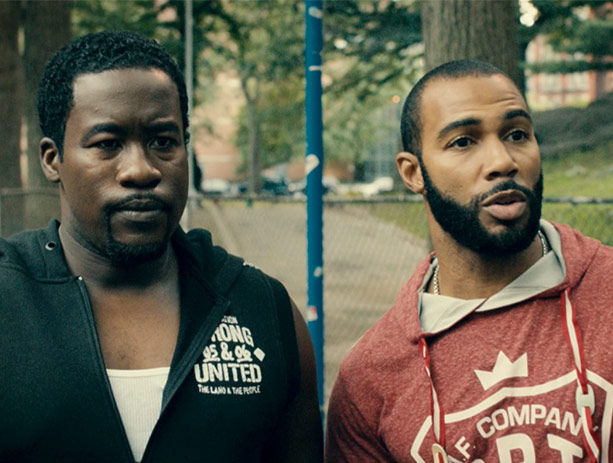 Jamal Joseph’s “Chapter &Verse” screens at the New Voices in Black Cinema Festival this Friday night, April 22 at 9:30pm, at BAMCinematek in Brooklyn, NYC, which will be followed by a Q & A with the filmmaker. Tickets are now on sale and can be pre-ordered here: http://www.bam.org/film/2016/chapter-and-verse. Below find our earlier review of the film along with its trailer.

Jamal Joseph’s “Chapter &Verse” is about cycles, second chances, and being present for the next generation

So much of what ails the Black American community occurs in cycles. Blatant and institutionalized racism has led to poverty, mass incarceration, gang violence, and so may other problematic issues. Unfortunately, these problems occur time and time again, because the root of what is broken remains unfixed.

Produced by acclaimed director Antoine Fuqua, Jamal Joseph’s "Chapter & Verse" is a film about terrible cycles, chances of redemption, and most importantly, it’s a film about fatherhood in the Black community.

Compassionately played by actor Daniel Beaty, (who also co-wrote the screenplay with Jamal Joseph), the film follows S. Lance Ingram aka Crazy L from 118th, on his quest for a fresh start. Newly released from prison after an eight year sentence, Lance has returned home to Harlem, NY; a neighborhood that has been drastically transformed since his initial imprisonment. Harlem was once a neighborhood fully of violence and impoverishment; ramifications form the crack cocaine epidemic and the War on Drugs. However, gentrification has quickly given much of the area a complete overhaul.  Living in a halfway house, Lance attempts to get work by using the computer technology skills that he’s acquired in prison. Instead, he is only able to find employment at a soup pantry, washing dishes and delivering meals to those in need.

On one of his runs, Lance encounters Miss Mandy (played exceptionally by veteran actress Loretta Devine) and the duo strike up an unlikely friendship. As Lance works to redefine himself in society, and make the best of his second chance, he continually encounters Miss Mandy’s troubled 15-year old grandson Ty, who is involved in the small but dangerous Harlem street gang, The Runners.

Since Miss Mandy can’t seem to get through to Ty, Lance takes it upon himself to try and show the angry young man some direction. He understands all too well the path that Ty is going down, and he tries desperately to get him to walk away. What is poignant about Lance and Ty’s relationship are the quiet moments. They observe one another often. Ty unwittingly looks to Lance as a guide, an example of manhood, while Lance is constantly considering how he should approach Ty. It’s a dynamic that is often glossed over when discussing the relationship between Black men and boys. And yet, Joseph captures it perfectly onscreen.

“Chapter &Verse” isn’t a perfect film; some of the characters’ motivations seem far-fetched and some of the plot points are rather puzzling. One particular scene feels a tad forced, taking the audience out of the already established authenticity. Still, in spite of this, the film has a lot of warmth, love and power. Omari Hardwick, who continually gives an amazing performance on Starz’s “Power”, portrays Lance’s best friend of 27 years, Jomo. Lance seems weary of him however, which makes the audience question his motives as well. After all, Hardwick has become a master at playing characters with very different sides to their personalities.

Despite the film’s somewhat dark subject matter, Joseph brings a ton of light and humor to the story. Whether it’s giving Miss Mandy lessons on how to order things off of the Internet, or being swindled in the sexual seduction of a lifetime, Lance frequently finds himself in some surprisingly hilarious situations. For someone who is desperately trying to stay on the straight and narrow, he often get’s a lot more than he bargained for.

“Chapter &Verse” is not simply a story about new beginnings. It’s a film about all the ways things have changed for Black people (Black men in particular) and all of the ways that they have continued to remain the same. It’s Joseph’s homage to Harlem. A love story if you will, to a neighborhood that I’ve grown to know as home, a place with so much rich history and yet looks completely different than it did even a decade ago. Most importantly, it’s about the laws that have held us down and the others we’ve chosen to abide by.