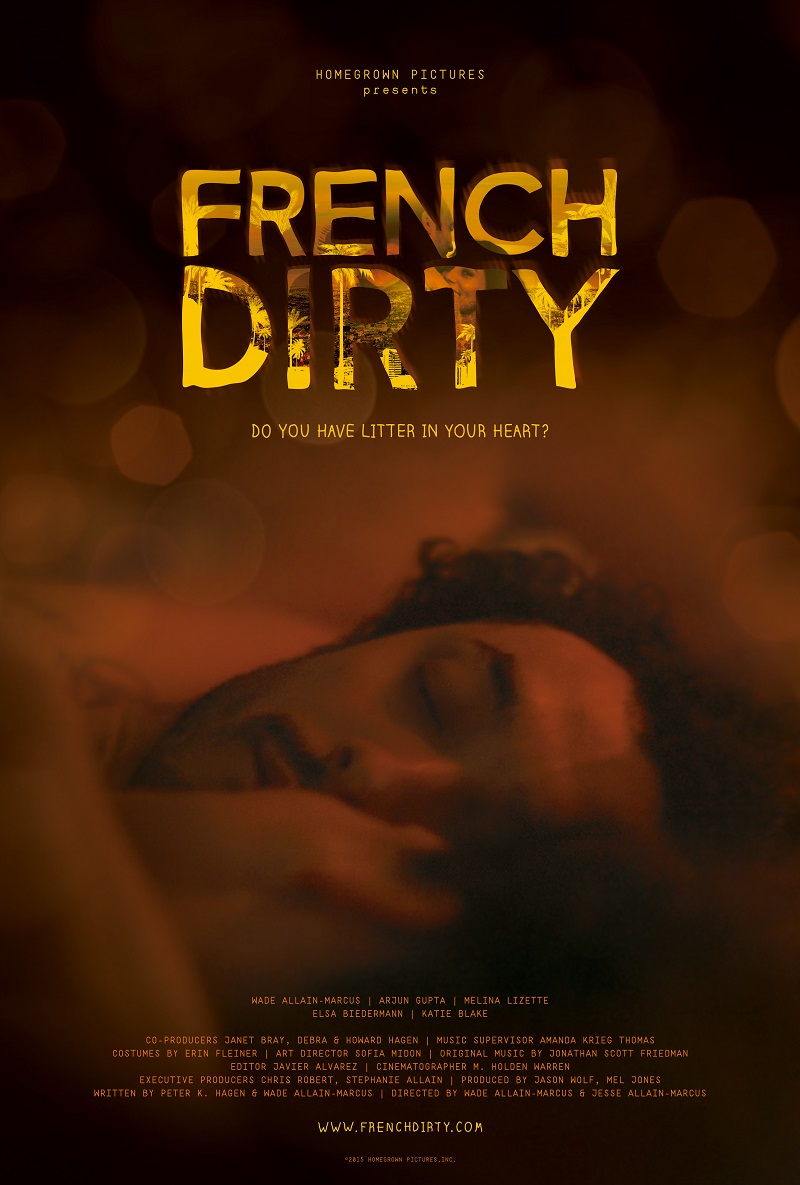 Screening at the upcoming New Voices in Black Cinema Festival, which runs April 21 to 24 at BAMCinematek in Brooklyn, NYC, is the debut feature film from brothers Wade Allain-Marcus and Jesse Allain-Marcus, titled "French Dirty," which will screen as the festival’s closing night film, on April 24 at 7pm. The quintessentially Los Angeles dramedy stars Wade Allain-Marcus as Vincent, a child of divorce, turning 30 years old, seemingly aimless, but in search of himself. The screening of this freewheeling, exuberantly inventive indie dramedy will be followed by a Q&A with the filmmakers. For tickets (which are now on sale) and other info about the film and the festival, visit http://www.bam.org/film/2016/french-dirty. Below is our previous review of the film written by Brandon Wilson, followed by a trailer.

How is there no French name for the 30 crisis film? Possibly there will be in the future. The “quarter life” crisis that accompanies turning 30 has long been a staple of the cinema (isn’t "Rocky" ultimately a 30 crisis film?) but it seems to have taken on a new layer of importance in the last 20 years.

As adulthood withers and people cling to their youth for longer and longer, 30 has become the new age for coming-of-age stories. The new film "French Dirty," directed by brothers Wade and Jesse Allain-Marcus, addresses that crisis and explores how it effects the generation after my own. The film is uneven, but such is the nature of debut films. In the end, what the film gets right outweighs its stumbles.

On the surface "French Dirty" isn’t a 30 crisis film (the main character only mentions his age once in the introduction). It’s a romantic comedy, but manages to be a perverse variant on that beleaguered genre.

Vincent (played by co-director/co-writer Wade Allain-Marcus) sleeps with Roma (played by Melina Lizette), the girlfriend of his best friend Steve (Arjun Gupta, seen on "Nurse Jackie"). Vincent introduced them after meeting Roma at a car wash in a “meet cute” scene Katherine Heigl would approve of. Vincent is in a doomed relationship with Jess (Katie Blake) but he steers Roma toward Steve even though he wants her for himself.

Written by (Wade) Allain-Marcus & Peter Hagen, the film owes much to the country referred to in its never-explained title. "French Dirty" is a very Los Angeles version of the kind of French romantic drama made by Eric Rohmer, Francois Truffaut, or more recently Arnaud Desplechin. The French New Wave was clearly a touchstone for the filmmakers as evidenced by the lengthy dance scene that establishes the heat between Vincent and Roma, only to have Steve inadvertently ruin the moment.

Jettisoning the cinephilia (save for a priceless t-shirt Vincent wears that mentions Edith Head), the film focuses on the examination of youth that preoccupied the Nouvelle Vague. Much time is dedicated to the youthful carousing of our main characters. Eventually, the good times had by the characters wears thin and their youthful brio feels relentlessly one-note; but perhaps by then we’re meant to view the revelry through a certain sadness, given that we know all this fun is a prelude to pain and betrayal.

Employing a non-linear time structure, the narrative bounces around from present to past. At times the device feels tacked on, but in the end, it pays off. In part it succeeds because the flashbacks contain actual home movie footage of Allain-Marcus. It gives the film an intimacy, and it also visually expresses something important about 30. It’s the age where your history begins to weigh on you. It’s the age where you start to take stock of old injuries and understand how they have shaped you. The modernist editing style conveys what a persistent nuisance memory can be.

Special mention must be given to Elsa Biedermann who plays Josephine, a French tourist. Just as the film confidently approaches a terminally cliche-ridden genre, Biedermann pulls off a winning performance that is in essence a key archetype of the romantic comedy: the “manic pixie dream girl”. This character type has been justly derided, but Biedermann works magic. She nearly steals the film and her presence is the not-so secret weapon of "French Dirty" (Biedermann won a special jury mention at the Los Angeles Film Festival). Her character seems familiar but it deftly dodges all the cliches you’ve come to expect.

Another standout contribution comes from cinematographer M. Holden Warren. His background in documentary serves the film well, and he captures June Gloom Los Angeles in all of its hazy gray splendor (as opposed to the sunshine and blue skies from the postcards).

The directors of "French Dirty" aren’t trying to make a Big Statement and the film benefits from that. And yet the film speaks volumes about today’s 30 year olds and their social mores, specifically in balancing the equation between friendship and love. Vincent and Roma have chemistry, but the real romance here is between Vincent and Steve. As in Noah Baumbach’s recent Gen X vs Gen Y comedy of manners, "While We’re Young," it’s the relationship between the men that truly drives the film. None of the characters Tony Roberts or Michael Murphy ever played meant as much to Woody Allen’s many protagonists as Vincent & Steve mean to each other. There’s nothing wrong with that (although some of the ways the lads talk about Roma as “a gift” border on objectification), but it does hint at a persistent chasm between men and women that once seemed to be closing. Or perhaps the young have figured out that lovers come and go with the seasons, but friends are, if you’re lucky, perennial?
—

Brandon Wilson is a writer and director living in Los Angeles. Find him on Twitter at @GeniusBastard