Deep pain is festering for the Bordelons in Season 4, episode 4 of Queen Sugar, "Skin Transparent." Directed by Jezebel director Numa Perrier in her TV debut, "Skin Transparent" shows Nova (Rutina Wesley) about to embark on her book tour for Blessing & Blood--which is already garnering critical acclaim. As she gears up to leave, she enlists Micah (Nicholas L. Ashe) to house sit for her. Having read her book, Micah is proud of his aunt and doesn't seem to understand the hurt and anguish that it's causing the rest of his family. However, Nova is finally getting how badly she's screwed up--though she hasn't yet admitted it. Aunt Violet (Tina Lifford), Charley (Dawn-Lyen Gardner) and Ralph Angel (Kofi Siriboe) are freezing her out, and it's killing her. With her upcoming book launch, Nova is desperate to see some familiar faces in the audience, but her siblings and her aunt won't even return her phone calls.

Still shaken by Jimmy Dale (David Alan Grier) crashing through her world, Violet is utterly traumatized. She's barely functioning, and Hollywood (Omar J. Dorsey) can tell that Jimmy Dale's short reemergence into Violet's life has left her off-kilter. Vi can't even bring herself to leave the Vi's Prized Pies & Diner's kitchen. She snaps at her favorite employee and has Hollywood and Rhonda run interference to keep Nova away from her place of business. Despite Hollywood's urging to talk things out, Violet can't bring herself to face her past or her present feelings.

Meanwhile, Charley and Romero's (Walter Perez) clinic for undocumented workers is already up and running in the barracks behind Queen Sugar mill. Romero seems thrilled by the operation, but Charley's still spiraling from Nova's book and from her secret about the men who died on her land. As a result, she isn't able to be authentically joyful. At the clinic, Micah meets Romero by chance, and after so much buildup, it's clear that it's not exactly the encounter Charley had been hoping for.

There is some good news in the midst of this. Charley's investigator has found the man who's been sending death threats to Micah, and he's been arrested. Also, Ralph Angel has started the Ernest Bordelon Re-Entry Program for formerly incarcerated people. It's something his old friends have been urging him to do for some time. However, amid the positive things happening in his life, RA has also begun getting questions about Blue's paternity.

Of course, the Landrys and the Beaudreaus are up to their old bullshit. Charley's investigator has discovered that the prominent families have come together to help fund a federal highway that will cut right through St. Joseph's county and the lands of many of its farmer. The plan is so massive and well thought out that they've already begun infiltrating the city council. There's a lot at stake here, and even Charley with all of her tenacity, brilliance, and risk-taking might not be able to stop it. In the midst of this, Darla's (Bianca Lawson) world shatters when she finally gets her hands on Nova's book. After reading the devastating passages on Blue and her addiction, tearfully and full of rage, she confronts Nova. Though Nova tries to justify her actions--again--Darla puts her in her place, calling her a thief of someone else's memories and warning her to stay away from Blue.

One person is still up to his same BS. Davis (Timon Kyle Durrett) thinks it's cute to show up to Charley's home unannounced to pick up Micah. He brings his 13-year-old daughter, Tia with him and he also announces that he will be retiring from the league and taking a coaching job at a university in Baton Rouge. In a taut and powerfully acted scene, Charley informs Davis that his daughter is always welcome in her home, but she's not about to play anyone's surrogate mama.

Later, Nova is at her book signing, and the only familiar faces in the crowd are Micah and her ex-lover, Chantal (Reagan Gomez-Preston). During the launch-- Nova shares a very personal anecdote about her late father, Ernest. It's a last minute addition that reflects on a fishing trip they took once. It was the last fishing trip they ever took together, one where Nova was sexually harassed and violently threatened by three white men. Nova recalled seeing her father bury a massive object in the middle of the night shortly after that. She also never saw any of those men again. The story is startling, so much so that Micah immediately shares it with his mother upon his return home. Charley speaks to Vi and Ralph Angel about the story, and though Vi doesn't confirm it fully, she tells her niece and nephew to mind their own business. 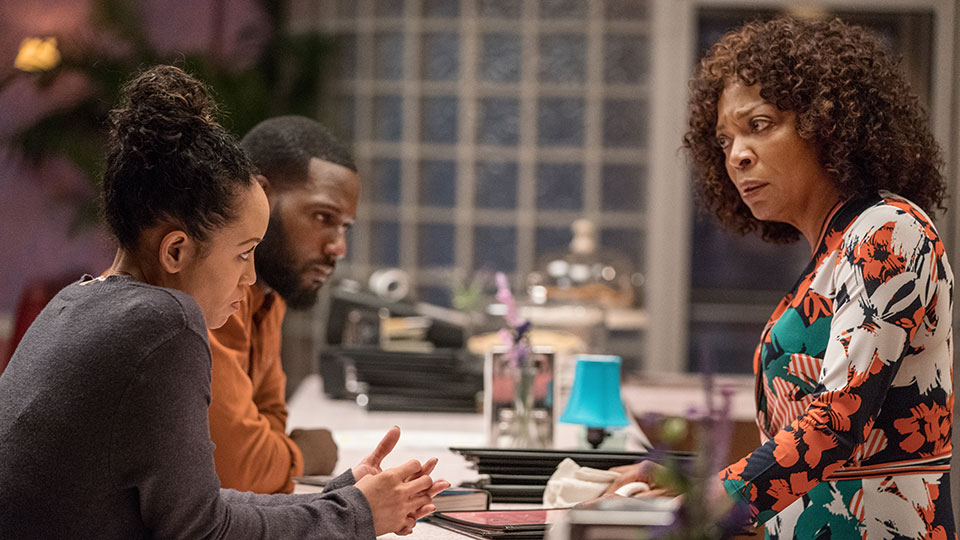 At the book event, Chantel and Nova reconnect, with Chantal offering to be a friendly ear or something more for Nova. Nova declines, only to try and entice Chantal to come over to her place much later that same evening. Chantal lets Nova have it. She drags Nova for her selfishness and suggests that she needs to work on herself. Nova's not trying to hear it, and with her family ignoring her and a six-week book tour ahead of her, she leaves St. Joesph county with an unsettled spirit and without the support of those she loves the most.

As the episode ends, we listen to gut-wrenching wails from Darla and Vi, as Ralph Angel and Hollywood respectively look on helplessly.