NYC: Sidney Poitier Retrospective at Museum of the Moving Image Kicks Off This Weekend (April 9-17) 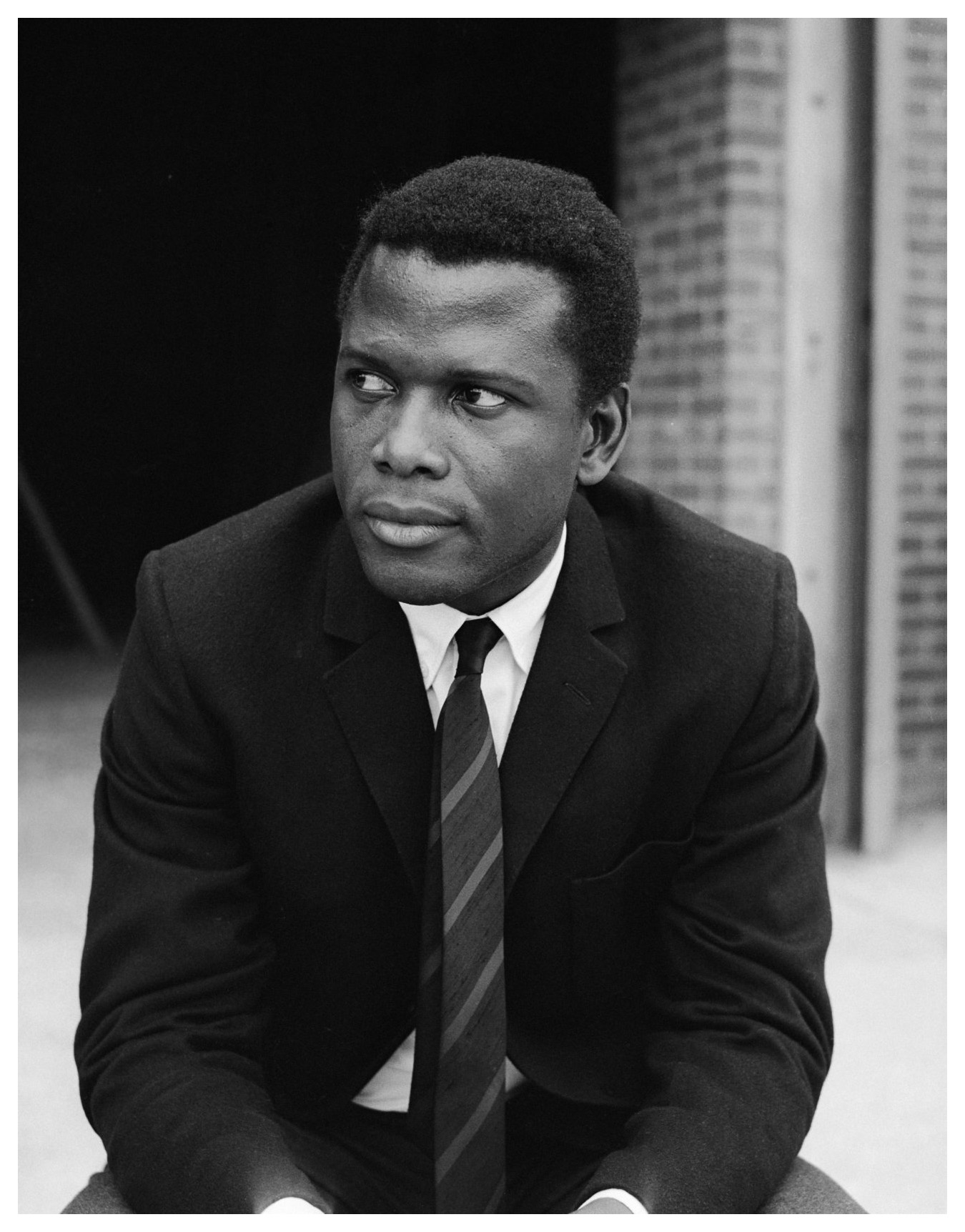 Hey NYC, here’s an opportunity to see a selection of Sidney Poitier’s film’s on the big screen – especially if you’ve never had the pleasure.

This year marks the 89th birthday (celebrated on February 20th) of a man, a legend who I’m sure needs absolutely no introduction on this website, who overcame decades of stereotypical Hollywood portrayals of black people, and would build a career that would see him become an instrumental figure in the evolution of roles for black actors on screen. From his feature-film debut in 1950 in ”No Way Out,” starring as a doctor with a sense of justice, to the streetwise student in "The Blackboard Jungle,” the stern schoolteacher of ”To Sir With Love,” the frustrated Walter Lee Younger in ”A Raisin in the Sun” (a role he originated on Broadway), to the outspoken detective Virgil Tibbs of ”In the Heat of the Night," and many more, including those he directed himself, which count as my favorite Poitier films: the Western, "Buck and the Preacher," in which Poitier also starred alongside Harry Belafonte, as well as the trio of films he made in the 1970s with Bill Cosby, "Uptown Saturday Night," "Let’s Do It Again," and "A Piece of the Action." There’s also the oft forgotten romantic drama "For Love of Ivy," which he starred in with the late Abbey Lincoln, and came up with the story for, although it was directed by Daniel Mann.

Now the Museum of the Moving Image (MoMI) in Astoria, Queens, will host a tribute to Sir Poitier that will include a 9-film retrospective, kicking off this Saturday, April 9, and running through the 17th.

The series is organized by guest curator Mia Mask, Associate Professor of Film at Vassar College, and the co-editor with Ian Gregory Stachan of the new book "Poitier Revisited: Reconsidering a Black Icon in the Obama Age" (2015, Bloomsbury). Informed by the essays in the book, the film series invites viewers to take a fresh look at Poitier’s career.

Films that are included in the series include the aforementioned "No Way Out," "Buck and the Preacher," "In the Heat of the Night;" "A Raisin in the Sun," "Uptown Saturday Night" and "Let’s Do It Again," as well as "Edge of the City," "Paris Blues," and "The Defiant Ones," a film and performance that earned him an Oscar nomination (his first), making him the first male actor of African descent to be nominated for a competitive Academy Award.

Most films will be presented in 35mm.

“Sidney Poitier is one of the most significant icons of the 20th century,” said Mask. “He helped to change the American cultural and political landscape by portraying a range of complex, sometimes contradictory, but always dignified characters. He enabled Americans to re-envision black masculinity by deftly negotiating and navigating the color line in American cinema. This retrospective of films is a wonderful opportunity to revisit the relationship between Poitier’s fascinating career and the current political landscape.”

All screenings take place at Museum of the Moving Image, 36-01 35 Avenue in Astoria, New York. Advance tickets are available online at http://movingimage.us.

The complete schedule and descriptions are included below, via press release from MoMI:

No Way Out
SATURDAY, APRIL 9, 2:00 P.M.
Dir. Joseph L. Mankiewicz. 1950, 106 mins. 35mm. With Richard Widmark, Sidney Poitier, Linda Darnell. Poitier made his striking film debut in one of the first – and most powerful—Hollywood films to confront race relations in America. He stars as an idealistic doctor who is terrorized by Richard Widmark’s racist psychopath when a white criminal dies at his hospital. Intelligently directed by Joseph L. Mankiewicz (the same year he made All About Eve), No Way Out is both a gripping noir and a potent rebuff of racism. Future stars and activists Ossie Davis and Ruby Dee appear in small roles.

Buck and the Preacher
SATURDAY, APRIL 9, 4:30 P.M.
Dir. Sidney Poitier. 1972, 102 mins. 35mm. With Sidney Poitier, Harry Belafonte, Ruby Dee. Poitier made his remarkably assured directorial debut with this rollicking revisionist western. He stars alongside Harry Belafonte as, respectively, a wagon master and a shiftless preacher who join forces to protect a band of freed slaves from white bounty hunters. Marrying a black power message to the form of a classical western, Buck and the Preacher is one of the first films to explore the African-American experience in the post-Civil War West. Jazz legend Benny Carter wrote the unique score, which is performed by blues greats Sonny Terry, Brownie McGhee, and Don Frank Brooks.

Edge of the City
SUNDAY, APRIL 10, 2:00 P.M.
Dir. Martin Ritt. 1957, 85 mins. 35mm. With Sidney Poitier, John Cassavetes, Jack Warden, Ruby Dee. A searing tragedy of racism and racketeering plays out against the New York City waterfront in this noir-tinged drama. John Cassavetes stars as a drifter who takes a job in the dockyards and whose friendship with an African-American coworker, played by Poitier (receiving co-star billing for the first time), makes them both a target for a racist supervisor (Jack Warden). Sensitively helmed by socially progressive director Martin Ritt (Hud, Norma Rae), Edge of the City is a starkly realistic, path-breaking depiction of interracial friendship and union corruption.

The Defiant Ones
SUNDAY, APRIL 10, 4:00 P.M.
Dir. Stanley Kramer. 1958, 97 mins. 35mm. With Sidney Poitier, Tony Curtis. Poitier and Tony Curtis are a pair of escaped convicts—shackled together and none too happy about it—who must work together to survive as they flee across hostile Southern terrain. Distinguished by tour-de-force performances from the two leads and moody, Oscar-winning black-and-white cinematography, Stanley Kramer’s groundbreaking microcosm of America’s racial struggle packs both genuine suspense and a pointed social commentary.

Paris Blues
SATURDAY, APRIL 16, 1:30 P.M.
Dir. Martin Ritt. 1961, 98 mins. 35mm. With Paul Newman, Sidney Poitier, Joanne Woodward, Diahann Carroll. Poitier and Paul Newman are a pair of American ex-pat jazz musicians living la vie boheme in Paris in this intoxicating, music-filled romance. Amidst the beatnik cool of Left Bank jazz clubs, the two men each find romance with American girls on holiday—but music is their real passion. The highlight is a joyous jam session between Poitier, Newman, and none other than Louis Armstrong. Another jazz legend, Duke Ellington, composed the evocative, Oscar-nominated score, which includes classics like “Take The ‘A’ Train” and “Mood Indigo.”

In the Heat of the Night
SATURDAY, APRIL 16, 4:00 P.M.
Dir. Norman Jewison. 1967, 110 mins. 35mm. With Sidney Poitier, Rod Steiger, Warren Oates, Lee Grant. Poitier and Rod Steiger make for one of the most riveting dramatic teams in movie history as a brash Philadelphia detective and a racist Southern sheriff thrown together to solve a rural Mississippi murder. Featuring moody lensing by the great Haskell Wexler and a bluesy score by Quincy Jones, Norman Jewison’s multi-Oscar winner (including Best Picture and Actor for Steiger) functions as both a crackling police procedural and a potent examination of American racial tension.

A Raisin in the Sun
SUNDAY, APRIL 17, 1:30 P.M.
Dir. Daniel Petrie. 1961, 127 mins. 35mm. With Sidney Poitier, Ruby Dee, Claudia McNeil, Diana Sands. Lorraine Hansberry’s landmark vision of black family life made it to the big screen with nearly all the original Broadway cast intact. Poitier reprises his role as Walter Lee Younger, an ambitious husband and father living in poverty on Chicago’s South Side. When his recently widowed mother (Claudia McNeil) inherits a $10,000 life insurance policy, Walter sees a chance to build a better life for himself—but his mother has other ideas. Poitier delivers one of his defining performances in this heartrending drama of struggle in the face of overwhelming adversity.

Let’s Do It Again
SUNDAY, APRIL 17, 6:30 P.M.
Dir. Sidney Poitier. 1975, 110 mins. Digital projection. With Sidney Poitier, Bill Cosby, Calvin Lockhart. Following the success of the previous year’s Uptown Saturday Night, Poitier and Bill Cosby reteamed for this comedy. They play a couple of fraternal lodge members who try to make a quick buck by fixing a fight in New Orleans—but get in over their heads when the mob gets involved. The funky soundtrack is by Curtis Mayfield, with a title track performed by The Staple Singers.