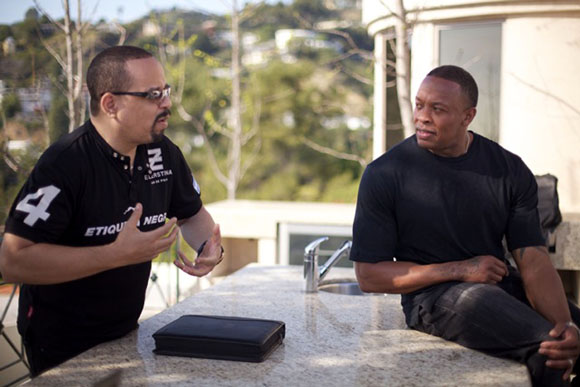 In an interview posted on this site about 6 months ago, Ice-T said of his directorial debut, Something For Nothing – The Art Of Rap, that his intent with the film was to document the craft of rapping, and not all the crass excesses the music has become emblematic of. His goal, as he stated, was to produce a kind of rap masterclass for audiences of the music, teaching them how the music's best and most respected, both old and young, create – specifically, how the pen their rhymes.

And while it's certainly very well-intentioned, I found the film unfocused, as if he wasn't entirely sure of what its heartbeat was.

It's part homage to legends and veterans, part history lesson, part insight into creative process, part paean to the cities in which many of the music's stars originate, part Ice-T showcase, and probably more.

Ice-T interviewed some 54 "masters of rap," asking them the same set of 15 questions; but the film isn't long enough to contain all 54 masters answering all 15 questions. So we get what I'd call snapshot artists profiles of varying lengths, some more interesting and/or revealing than others.

The casual nature of the film makes it feel like a bunch of mostly guys and a few gals with similar passions, hanging out and rapping with one another. And I actually liked that quality about it, but I can't say that I learned much here, even though that's what I was really looking forward to: a master class in lyricism; really getting into the heads of these poets and gaining lots of insight into their individual processes while writing – just like any other form of expression that involves ink and paper (or a keyboard and a screen these days).

We get just a wee-bit of that, but, given the film's title (The Art Of Rap) and all that Ice-T had said about it before I screened the film at Sundance this year, I was expecting it to be full of scenes like that.

For example, in talking to Chuck D, I'd have loved for him to take one of Public Enemy's more popular tracks from yesteryear, and really dissect it, stanza by stanza, clueing the audience in to what he was thinking when he came up with a particular line, or rhyme, or even just a word; or how long it took him to write and become satisfied with a complete track before they went into the studio to record; or what inspired a certain piece, etc.

Essentially, taking us through each artist's creative processes from first thought to recording studio; that's what I was expecting, but that's not what I got.

Instead there's a lot of reminiscing, and we get to see all his subjects perform on the fly, a cappella, some of their best work, intercut with countless scenes of cities where his subjects live (New York, Los Angeles and Detroit primarily) – sequences that I realize where there to serve as transitions, but I thought were unnecessarily long and repetitious. How many shots of the New York City skyline at night do I have to see, for example? Plenty, in this documentary, apparently.

And all those slow-motion shots of Ice-T walking down streets with his sunglasses on, looking cool and tough, were also unnecessary, and, as far as I'm concerned, added little to what was (or should have been) the film's main narrative thread.

There are also moments, while shooting on the street, and, as you'd expect, fans would interrupt his conversation with whomever he was interviewing at the time; ice-T would get annoyed and tell the fan to scoot along because they're interrupting the recording. My immediate thought when I saw those sequences was, why even include that footage in the final cut of the film – shots of Ice shooing these nosey cats away; all of that could've been left on the cutting room floor.

It all just came across as somewhat pompous and was actually kind of a turn off.

As much of a fan I was of his albums way back when (6 In The Mornin' still gets my head bobbing even still today), What he really should've done, in my humble opinion, was take himself out of the film completely, and just let his interviewees, as I already noted, wax philosophic on the craft of rapping, and school the audience on method, technique, and process. Let's go into the bat cave with them, into their dungeons, their dark and secretive places where all the magic that eventually ends up on a record, originates.

So I'm not really sure what we're expected to get out of the film. Like I already said, I don't feel like I learned a lot, something I was hoping would definitely happen, and I certainly don't consider myself a rap aficionado. I was once a big fan of the music, during my high school and college days, but it's rare that I listen to any of today's stars. I have a basic understanding of the origins of hip-hop, as well as who many of its early proprietors were, and how they would go on to influence generations that came after them, and so on.

And if that was the film he wanted to make – a history of rap – he doesn't quite succeed there either; nor does he fully succeed in enlightening us on the art or craft of rap.

As I watched, I imagined how much better his stated intent would be served as an ongoing series, whether for TV or even the web – each episode spent entirely with one rapper at a time, asking far more inquisitive questions which would hopefully prompt revealing and enlightening answers.

Obviously Ice-T loves and believes in the music, which shows throughout in his numerous conversations; so if I were to summarize it, I'd say it was more of an ode to a music and movement he was once a force within (an inspiration to many who came after him, as a number of his interviewees admitted), a nod to his contemporaries and favorites, than it is the aforementioned master class in the craft, or in the art of rap, as the film is titled.

I saw it 6 months ago at Sundance, so maybe what I saw isn't what you'll see this weekend (it opens today in limited release today so check your local listings); changes may or may not have been made since then.