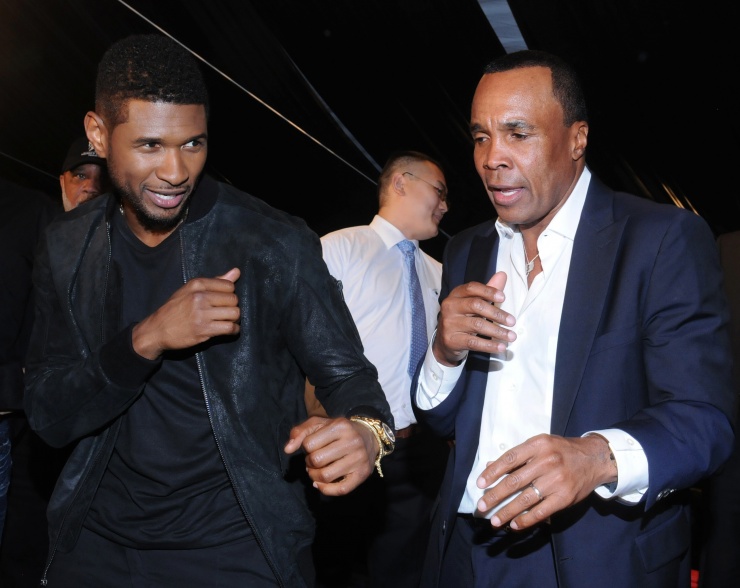 "I train like an athlete very day, believe it or not… My commitment to this character demands that I not only physically get ready, but also become him… The hair, the personality, the manner he conducts himself in — all that. He’s an incredible man." ~ Usher, in a Mens Health magazine 3 years ago, while he was prepping to play boxer Sugar Ray Leonard in "Hands of Stone," starring opposite Robert De Niro and Edgar Ramirez (replacing Gael García Bernal) in a story that will center primarily on Panamanian boxer Roberto Durán (played by Ramirez).

The biopic, written and directed by Jonathan Jakubowicz, will include the "Brawl in Montreal," the first fight between Durán and Leonard, and the "no mas" fight, which took place in New Orleans. In the eighth round of that fight, Duran inexplicably quit, saying in Spanish "no mas." They fought one more time, and Leonard won again.

Speaking about the project and his casting in the films, Usher had this to say:

– "It was proper casting […] I was selected. They approached me to do it. And all I had to do was consider it."

On his "proper casting" compared to the abilities of De Niro and Ramirez ("proper actors"), and whether he was at all intimidated at getting in the ring with them, so to speak…

– "Not at all […] not at all. There’s a respect for both parties. I’ve seen Oscar winners come out of left field."

On Oscar winners coming out of left field, and what he believes his chances are with this particular role…

– "I’m just saying Jennifer Hudson […] I’m not even saying… You asked me, is it OK to assume that an actor who doesn’t have as much skill can’t out-act an actor who is well-decorated? And what I’m saying is, if you take a moment to just analyse… No… I’m not intimidated in any way. Because there’s a shared passion and respect among all of us, and it’s the type of script that will allow all of us to shine."

– "I don’t know if this is the one that would win me an Oscar or not. I’m going into it offering my interpretation and my hard work and my dedication to be the best Sugar Ray ever. Or as good as the man can be. I’ve spoken to him, and I don’t know if I’ll ever be able to live up to him. But I’ll try to be better than him."

He also said that he believed his dancing skills would help him in the role, for which he shed a lot of weight.

– "You couldn’t find a more stylized boxer than Sugar Ray Leonard […] He was an incredible motion guy, the way he moved around the ring, and I think my dancing will make it easier for me to pick up his moves. I’ve been working on familiarizing myself with the ring, sparring and just understanding how to move in the ring."

This will be the 8-time Grammy-winner’s first leading role in a feature film.

"I’m up for the challenge, and I’m looking forward to it […] I think my overall feeling is one of anticipation. It seems like this is a real passion project. It’s a film that everybody is so invested in, and I have the good fortune of having the character I’m playing still around."

"Hands of Stone" will be released by The Weinstein Company on August 26.

A first trailer is embedded below, although Usher is in only a couple of clips (Smollett-Bell and Cathey aren’t in it at all; but it’s not their film):