Where Were The Black Actors In the 64th Cannes Film Festival Films?

So I’m finally in fighting shape to post after fifteen glorious days along the Croisette for the Festival De Cannes, known to you Westerners as the Cannes Film Festival.

Along with working to get my personal projects sold/financed, and partying with our own Wendy, among other cool folks, I was actually able to see a few In Competition and Marche du Cinema films!

So with an S&A flair, here’s my unique perspective on the lack of diverse casting in this year’s films:

WE NEED TO TALK ABOUT KEVIN 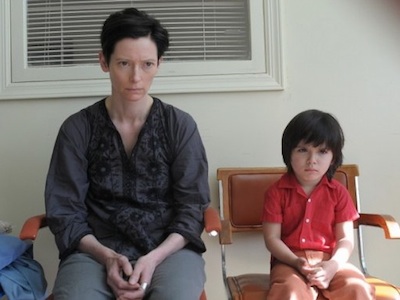 Starring the always fabulous and painstakingly tragic Tilda Swinton along with John C. Reilly playing yet another ignorant/confused husband and Ezra Miller as the dark and possibly possessed son Kevin, this is a riveting exploration of a mother’s disconnect with a son she never really wanted that leads to devastating results. Director Lynne Ramsey is a fantastic storyteller. I look forward to more from her.
*Curtis’ Afro Meter 200 reading: ZERO

It was good, my second favorite of the festival, but there AIN’T NO BLACK PEOPLE IN IT!

*The Afro Meter 200 (pat. pend.) does not account for background/extras and only takes into account talent with significant roles or presence, no matter the amount of dialogue/action they present.

LA PEIL QUE HABITO (THE SKIN I LIVE IN)

Film auteur Pedro Almodovar’s WAY over the top yarn about a respected surgeon (Antonio Banderas) who experiments with creating an unburnable & unbreakable second skin for accident victims after his wife tragically dies from her injuries in a car crash – or so we’re initially told. Though the performances were good, which for me is saying a lot since I’m no fan of Banderas, and though I normally I enjoy Almodovar’s work, it delved into the absurd for possibly tried too hard to be uncanny. A shame too, this was the In Competition film I most anticipated.
Curtis’ AfroMeter 200 reading: THREE

While singer Concha Buika (below) and her band were merely entertainers during some important scenes, they all got multiple close-ups and helped define the feel of those scenes so the meter at least twitched this time.

MIDNIGHT IN PARIS
The latest feature from Woody Allen, this… Y’know what, I’ll stop wasting time and just post the results since you already know the answer.
Curtis’ Afro Meter 200 reading: ZERO

AIN’T NO BLACK PEOPLE IN IT!

Christophe Honore takes us through 30+ years of a French mother’s whoring (you read that right) and the results it had on her daughter’s navigation through loving personal relationships. Starring Catherine Denueve as the mother, Milos Foreman also co-stars and is really funny in it. Walking in I didn’t know it was going to be somewhat of a musical (groan) but it was so wonderfully acted and shot I somewhat got over that.
Curtis’ Afro Meter 200 reading: ZERO

AIN’T NO BLACK PEOPLE IN IT!

Ryan Gosling, quite possibly the coolest actor in Hollywood (sorry Jamie Foxx) stars as a lonely stuntman who doubles as Los Angeles’ best getaway driver and gets personally involved with the wrong family, breaking him out of his sworn code of non-involvement. Directed by Nicholas Winding Refn (what a cool name!), Drive is truly cinematic with the best, at least in this NY’ers opinion, backstreet & non-famous views of L.A. that I’ve seen since Michael Mann’s HEAT. Refn uses violence in a haunting yet playful way that is both realistic (no, it really is) and effective. Albert Brooks gives a scary performance, and Ron Pearlman, as well as Bryan Cranston help seal the deal in making this a solid cast. I’d actually go see this again when it gets released in the States and am inclined to read the book the movie is based upon as well. Yeah, I never do that…I liked it that much.
Curtis’ Afro Meter 200 reading: TWO

There’s one (1) Black person in the cast, actress Tiara Parker, as the babysitter Cindy who says “Hi!” to the Driver and then is only seen in the background a few more times. Hey, she’s more than background, and so the meter twitched.

POLISSE
Director Maiwenn’s yearlong (on film) portrayal of the Paris CPU (Child Protection Unit) is a dramatic, fun and emotional journey into the depravity of pedophilia, child abandonment, workplace relationships, and the effect of taking the effect of your job home too often. It was among my favorite of the In Competition films.
Curtis’ Afro Meter 200 reading: EIGHT

Oh yeah! Finally a high hit! Fred, the hothead among the cops, is portrayed French rapper Joey Starr (see below) and he really stood out among the great ensemble cast. His scenes were the most intense, especially one with a homeless African mother forced to give up her son so he doesn’t have to sleep on the street. Totally gut-wrenching – and had this reviewer teary-eyed (did I just admit that?).

BLACK GOLD
I was excited to see this as the movie takes place in the River Delta of Nigeria where 50% of the USA’s oil reserves come from. However…the multiple cheesy instances and dialogue in the movie cannot warrant a good review. I did like the performance from the lead Mbong Amata (Amazing Grace), who plays the female rebel that the citizens rally around when protesting American interests in the region, as well as performances from many of the other African/Nigerian actors, which allow us to wallow through bad yet marketable (on paper/poster) 5-minute performances from Vivica A. Fox, Tom Sizemore and Micheal Madsen (I’m not making this up folks). Still, relatively well-known actors like Billy Zane and Sarah Wayne Callies (The Walking Dead, Prison Break) help somewhat save this sinking boat.
Curtis’ Afro Meter 200 reading: TEN

What happens when an old science experiment gets reignited and creates doubles of you and your friends – doubles that are smarter and tougher than you? That’s Gregory Orr’s feature film Recreator, a good premise that was executed well, especially for a genre film. Lead actor Anna Maeve annoyed the heck out of me, but the ending totally made up for that.
So at the end my Afro Meter 200 finally gets to boogie! Hopefully next year at Cannes its meter can stay mostly above the middle reading as international filmmakers realize that Black faces can act as well.
Curtis’ Afro Meter 200 reading: TEN

Jamaal Mallory-McCree was the third lead in this film and had significant lines and was really good in it. I was invited the view the film and didn’t realize he was one of the leads since, on a personal note, I actually auditioned Mallory-Mccree for my last film project and saw him perform in Zakiyyah Alexander’s stage play The Etymology of Bird this past summer. He was talented then and he’s even more impressive in Recreator.