Your 'Dear White People' Refresher, In Time For Season 3

Netflix is releasing the highly anticipated third season of the original series Dear White People on August 1. Based on the 2014 feature film of the same name, the whip-smart satire stars Shadow And Act RISING Award winner Logan Browning and follows Black students on the fictional Ivy League campus of Winchester University. Expect more laughs in the dramedy’s third season because creator and director Justin Simien, Yvette Nicole Brown, Laverne Cox, Flavor Flav and Blair Underwood will be joining the cast. And Sam (Browning), Joelle (Ashley Blaine Featherson), Coco (Antoinette Robertson), Troy (Brandon P. Bell), Lionel (DeRon Horton), Reggie (Marque Richardson) and more continue to ‘Grow by any means necessary,’ as this season’s promos promise. But before we get to this season, let’s look back at some of our favorite moments the deliciously controversial first 2 seasons.

When we first meet the main characters, most of them are outraged by a blackface party ‘Dear Black People’ thrown at their own campus. The series’ protagonist Sam, host of the “Dear White People” campus radio show, is seen leading the charge as the Black student groups on campus met  to create a plan to protest the racist state of affairs at ‘Winchester.’ Ironically, during the meeting, thanks to the internets and her lover with a self-proclaimed social-media relationship etiquette deficiency, her fellow students find out she is dating who her best friend calls ‘the opposition’ (a caucasian.)

Sam’s love survives, but her identity as an innocent bystander at the Blackface party does not, as she is led to confess that she is the one who sent the invite for the party. In the following episode, Lionel, a shy reporter who we see does not fit into perceived cultural norms, who also led the Black groups in crashing the Blackface party once he found out about it, also discovers Sam’s plan. Additionally, he comes out as gay to his sexy roommate and son of the school’s dean, Troy, while Troy sexily cuts Lionel’s hair. Troy’s response is loving and supportive. We stan a compassionate king.

In Chapters (episodes) III and VI we learn more about the painfully handsome Troy as he navigates his campaign for student body president and enraptures most all of the students on campus, from feminists to white jocks. His ‘relationship’ with the ambitious Coco is revealed to be one more of convenience than love, as their power couple status brings benefits to them both. Throughout the season, Troy and Coco wrestle with pleasing others and being true to their own desires. 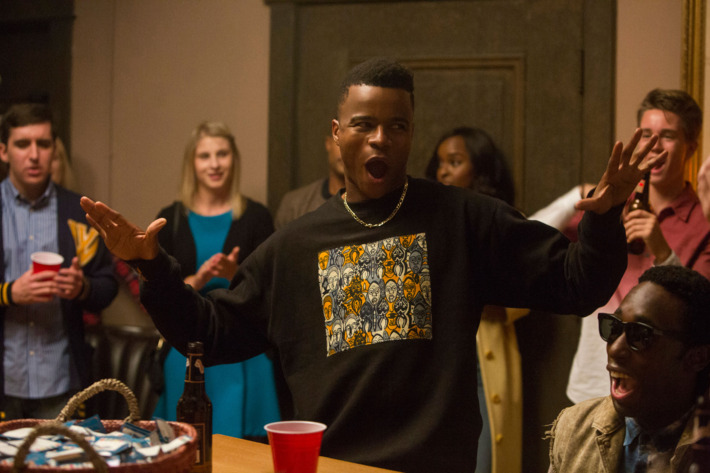 Chapter V was one of the most memorable, as the brilliant (and hot) computer science major and activist Reggie, faces one of what seems to be the hardest moments of his life. After getting in his feelings about his crush Sam dating a white man, he goes with Joelle and friends to a party to distract him, only to be traumatized by being racially profiled and having a gun pulled out on him by a campus police officer.

The effects of the campus police incident have on Reggie are long-lasting, and he has a hard time processing his emotions. The incident also brings Winchester students of all races together to bring justice for Reggie and retribution for the campus officer that threatened Reggie and caused the unrest. As Reggie becomes more secluded, Sam gets closer to him, invoking jealousy in her boyfriend Gabe. Turns out, Gabe was the one who called campus police to the scene in the first place, which causes an even bigger wedge between Sam and Gabe.

In Chapter VIII, Lionel gets a deeper look into Troy’s life as he follows him for most of the day to write a feature story on him. Lionel’s goal was to bring light to institutional racism that affects all Black people, by highlighting someone who comes across as or is privileged in some ways. In Chapter IX, we see Coco’s feelings for Troy change as she realizes he’s sleeping with one of their professors.

Finally, in Chapter 10, everyone tries to fulfill their personal goals as all of the stakes rise. Sam tries to mend her relationship with Gabe before leading her protest and Coco looks to take over the school’s planned ‘Town Hall’ because she wants to try to save their historically Black dorm (Armstrong Parker/AP House). Lionel asks the last question at the Town Hall and uses the platform to expose the president and the racist donors who are trying to integrate AP house, simultaneously getting everyone’s attention with a scheduled alert that the entire campus was able to get to see the story. Finally, Troy frustrated that he cannot get back into the locked Hall where the meeting took place after getting the news, broke one of the glass doors and is arrested.

When we see the Winchester crew again in Season 2, they are fresh off all of the protests and the Town Hall in a newly integrated Armstrong Hall. Sam is fighting off internet trolls coming for her on social media about what transpired and she can’t seem to get them out of her mentions. In Chapter 2, Reggie looks for different ways to cope with his trauma and after watching “Dereca,” going to therapy, Bible Study and more, he decides to speak with Gabe on his new show about race relations on campus.

In Chapter III, we find out more about Lionel’s research of the racists who wanted to integrate AP House also known as the Hancocks. His research on them also leads him to him inquiring more about Secret Society’s and finding a Black one he wants to learn more about. He also explores different parties during pride night as well as the potential of his relationship with his editor.

In Chapter IV, Coco continues to be the ‘White Whisperer’ of the newly integrated AP house, takes over the presidency of CORE (Coalition of Racial Equality) and has an added pressure with all of the controversy taking place on campus and the major personal changes she is going through physically.

We finally get to learn Joelle’s backstory in Chapter V as she gets time in the spotlight she deserves. She is almost literally swept off her feet by a handsome classmate and though he turned out to be a ‘Hotep’ — an Afrocentric ‘brotha’ who is insecure on average and claims to be ‘woke’–it was still a pleasure to see her swooned, wined and dined.

The trolls online bothering Sam are also getting to Lionel as he looks to uncover the Black Secret Society he’s slowly discovering. He even jeopardizes his new relationship because of his curiosity. A racist prank by a fellow student leads Sam to want to know more about the Black secret society too.

In Chapter VII Troy looks to find out more about himself although he uses drugs to take him deeper into his exploration. Gabe goes out on an exploration of his own in Chapter VIII, by interviewing Sam for his show as well.

In Chapter IX, Sam gets the news that her father passes away and we see how she receives support and love from her friends, as well as a note from her father he left her before he died.

By the Final Chapter of the season, the campus is in anticipation of their social justice speaker coming to visit as they want him to help them bring semblance to the campus. Further, Sam and Lionel have found enough information on the Black secret society ‘The Order of X’ that leads them to its leader, or so it seems.

From experiences to a script, to a twitter page, to a trailer, to a feature film to one of the best Netflix original series out there, Dear White People has been on a journey and we are excited to continue enjoying the ride and seeing where it will go next.